This Cash Noire slot is a deep and developed crime drama game from NetEnt, with a character who’s likely to come back with sequels.

The game is themed on Noir crime fiction, a genre of crime writing and especially films that were characterised by the existential phrase: “everybody’s f****d”. So, an interesting theme for a slot game!

The genre has come to mean a visual style in more recent years, and it’s that rather than the darkness at the heart of the American Dream that is guiding light of this game from one of the best developers in the business.

There’s a lot to this game. It has 1,024 ways to win, mystery symbols, a crime zone bonus, and a car chase bonus. It is heavy on features and on aesthetics.

Load up this game and a doomy bass note hits you right in the chest, as femmes fatales and murder weapons flit across the reels.

Are you going to take the case?

What game provider is behind Cash Noire?

This is a NetEnt game. The Swedish company, founded way back in 1996, is the number 1 slot company in the UK market according to the online slots auditing site that we use. They produce hit after hit – including Starburst and Gonzo’s Quest, two of the biggest, and most long-lived games in slots history – and they have massive visibility and reach. NetEnt run their own sites, and there are hundreds of websites dedicated to their games.

When was Cash Noire slot released?

What is the Cash Noire RTP?

The RTP of this game is 96.06%. This is about average for the current market. You should always remember that RTP (theoretical return to player) is a long-term, theoretical measure that assumes players will behave in a certain way, you should not use it as a predictor of your own game experience.

How many reels and pay lines does Cash Noire have?

This game plays out on a 5 by 4 grid, with 20 symbols. It doesn’t have classic pay lines but uses win combinations to deliver 1,024 ways-to-win.

What theme is used in Cash Noire slot?

The theme is noir films, crime drama, crime, and mystery. The graphics are film-like and high-contrast, inspired by noir films and TV series and the 1950s.

Can I play Cash Noire on mobile?

If your mobile supports JavaScript and HTML5 then you can play this game.

What is the Cash Noire slot variance?

The variance or volatility of Cash Noire is low to medium. There is no standard measure for volatility so it is not a scientific measure, but you should expect a game with this rating to pay out slightly smaller prizes on average but to pay them out slightly more often.

Does Cash Noire slot have free spins and bonus rounds?

This game has a free spins round. Free spins have an increasing multiplier and a crime map feature that awards higher multipliers and extra free spins.

Is there anything else I should know about Cash Noire slot?

There is a voice-over feature that you can turn on and off depending on whether or not you like crime stories. 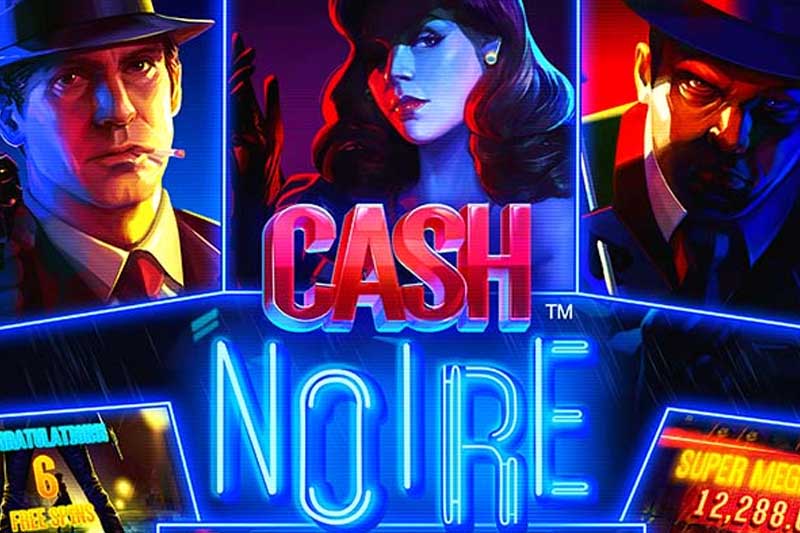 NetEnt games come with a standard control panel. The central console has the spin button flanked by the turbo and auto features. The menu button is at the left of the control panel, to the right of that is the bet window. You set this by setting the coin value, which is then bet on 20 lines.

The pay table opens with a magnifying glass paying from 2-times coin value to 4-times coin value. The same for a book of matches. An ace of spades pays 3-x to 5-x alongside the whisky.

The game comes with avalanche wins, delivering respins by dropping out winning symbols to allow new wins to drop in. Winless spins or the end of avalanches come with mystery symbols that convert into a random symbol that might keep the win coming.

Each spin comes with a crime zone. This grows as clues are activated by wins that land within the crime zone.

A clue list is used to trigger the free spins round too. Once the clues have all been activated a set of 6 free spins is awarded.

Free spins come with a city chase map that ticks up a multiplier and once full triggers extra free spins.

This is a great game if you want some involving gameplay and great design.

We love the dark noir/hardboiled aesthetic and Cash Noire slot is really true to the form, looking like a movie scene.

The movie analogy applies into the gameplay too, with a deep involving plot working through the base game to help to deliver the bonuses.

Free spins look like they will take quite some triggering, but if they do you’ll see big wins, and with lower variance, you should expect more frequent base game wins in any case.

This game is complicated though. We’ve done our best to explain it, but we don’t really have the space to go through all the features in detail, and we do suggest that you should take a good look at the instructions of this game before you play. Or play for free in demo mode.