We’re off to Ireland again. It seems that the “Lucky Irish” – though by some measures a pretty offensive set of stereotypes – the theme will never go out of fashion. I’m not Irish, so it’s not my place to say how people in modern Ireland feel about these tired old games, but they are enduringly popular on the slots scene and generally major on a retro, quite simple gameplay, bright colours and cheerful graphics, and big prize potential. They are games for real gamblers.

This one, from Red Tiger, a relatively new big player on the slots scene that was recently snapped up by giant NetEnt.

Red Tiger are innovators, and they’ve shaken things up a little here – though they still put a beer link into this game – particularly in the bonus features they offer, which are very generous.

The game is not a jackpot game despite the name. There isn’t even a local jackpot, let alone a progressive that links multiple machines together. There is high volatility and a relatively low theoretical return to player to consider too, but Rainbow Jackpots always provide high-quality games.

Should you jump over this rainbow?

Rainbow Jackpots slot is all about pots of gold and luck and is developed by Red Tiger Gaming who is responsible for bringing us great-looking and creative slot machines.

When was the Rainbow Jackpots slot released?

What is the Rainbow Jackpots RTP?

The return to player rate of Rainbow Jackpots slot is just below the industry average (96%) and stands at 95.16%.

This slot features a standard reel structure. There are 5 reels, 3 rows, and 20 pay lines. To hit a win you need at least three matching symbols on an active pay line starting from left to right.

The theme of Irish-luck is the centre of Rainbow Jackpots slot. You will see pots of gold and Leprechauns who will help you out with your wins and features. Rainbow Jackpots is all about luck and riches!

You can enjoy the Rainbow Jackpots slot machine on mobile devices such as Android or iPhone. Of course, you can also play it on other devices such as a tablet, desktop, or laptop.

What is the Rainbow Jackpots variance?

Rainbow Jackpots can be put in the medium to high variance slot category. So big wins are possible but are also shy to appear.

Rainbow Jackpots slot has a wide betting range. You can play it at a minimum of 20p per spin or increase your stake up to the max of £500. Also, this high variance slot comes with a top win of x1,000 the total stake on a single spin.

Rainbow Jackpots slot is packed with features. There is a Free Spins bonus triggered by 3 bonus icons. But if the Leprechaun randomly appears and blows his pipe on the reels he can upgrade the Free Spins and award up to 100 free spins!

The Beer Bonus is a ‘pick me’ bonus awarding cash prizes up to x100 but if Leprechaun randomly appears he will upgrade it again and prizes up to x1,000 will be possible!

Finally, the random feature awarding magical symbols for guaranteed wins can also be upgraded by the generous Leprechaun who will turn the symbols to 3×3 sized icons!

No, there aren’t any jackpots in the Rainbow Jackpots slot machine.

Is there anything else that I should know about the Rainbow Jackpots slot?

Keep an eye on the Leprechaun who can upgrade any of the features even the random ones. This can greatly increase your wins, especially with 100 free spins or 3×3 symbols that can bring enormous prizes.

If you like Irish-themed slots, you are lucky as there are so many with this theme. Some of the most popular ones that you should try are the Rainbow Riches slot series, Finn and the Swirly Spin, or Luck O’ The Irish slot, for example.

Red Tiger were a relatively small, but very successful and very well regarded game development company. And then, last year, they got snapped up by NetEnt, one of the real giants of the business, for over £200 million.

Red Tiger aren’t from East Asia as you might expect, but are based in the Isle of Man, so are sort of in and out of the UK (if you want to find out about off-shore tax regimes and the like then there’s lots of information out there).

The company was founded in 2014 and, after producing a relatively small but very well-received set of games was taken over last year.

Red Tiger does great things with the look and feel of its games, and also provides good value for players and some very big prizes – though no jackpots here as we have seen.

Red Tiger are fully licensed and you can play their games with confidence that they are safe.

This game was released in 2017 but has a very modern innovation – a range of theoretical return to player figures. The theoretical return to player is the percentage of the money that is put into the machine that is likely to be returned to players over its lifetime, and assuming that the players behave in a particular, rational way. These figures are generally around 96% and they are usually featured quite highly in a review like this. The reality is, that there are so many caveats to be applied to this measure that they are very limited in their use. However, you will find this game available at different sites with different RTPs and you should certainly check to see which sites are offering you the best value. The starting figure is 95.16% or a house edge of 4.84%.

The game is at the top end of the medium volatility range so is slightly more likely to pay out bigger prizes but slightly less likely to pay us regularly.

You can play this Rainbow Jackpots slot game on any desktop, mobile, or tablet device that supports JavaScript and HTML5. 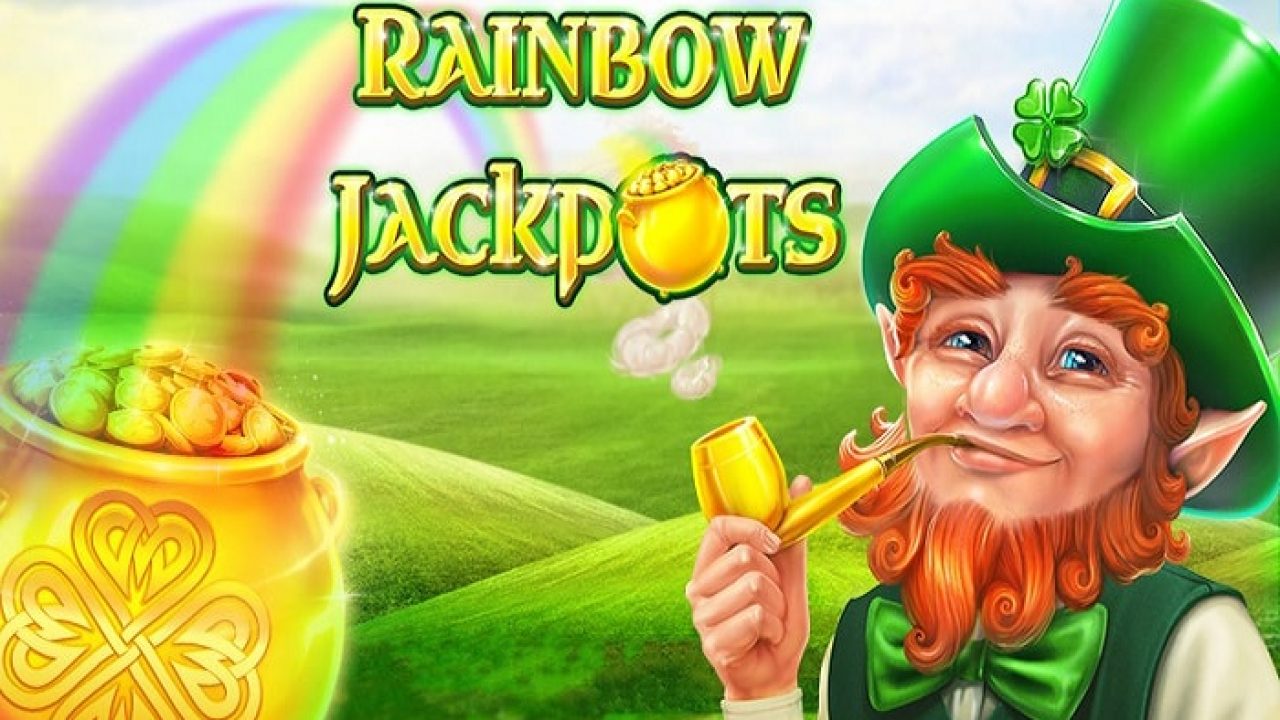 Red Tiger always use a similar control set-up and here it is from left to right on the control panel along the bottom of the screen: the bet button, with plus and minus controls, the auto spin button, a central window relaying messages, a pay table button and the spin control. You can find other controls, including settings and sound in the game frame.

The pay table is small in terms of the number of symbols.

At the bottom are our old friends the four suits of the card deck, they pay from 1.5-times stake to 4-times stake.

The leprechaun’s hat pays up to 8-times stake for a full set.

The golden shamrock pays 24-times stake for a full-house of five.

There is a wild symbol, giving the biggest wins with 40-times your stake for a full set of five.

An animated leprechaun signals the triggering of a choice of random bonus features.

The Beer Bonus sees players rewarded when three pint glasses hit the reels, and a second game with the players guessing which pint glass will be filled the most is triggered. Prizes go up to 100 times stake with a possible 10-fold multiplier on the prize.

The pipe bonus puts extra wins on the reels with substitutions and an upgrade to giant symbols that super-size those winning combos.

There’s also a free spins round, triggered by the scatter. Three scatters awards a random number of free rounds, with the leprechaun delivering the news of up to 100 cash-free games.

What a great game this Rainbow Jackpots slot is. The Irish theme has been done to death, but, like a zombie, the games keep coming and consumers keep playing them! Rainbow Jackpots misses a couple of classic genre points by not having a jackpot and by jazzing up the base game with a load of extras.

That’s great news for players, who are rewarded for rocking up at this game with a playable and eclectic base game backed up with a superb, and possibly very high paying, free spins round.

We’re not all that happy about using a jackpot title and then not delivering a jackpot, but there is very big win potential here so we can forgive it.

Another great game from a growing studio.