I don’t know Rick and Morty well, but I gather they provoke strong feelings in some people! Strong positive and negative feelings. All great art does this – no doubt, someone booed the Mona Lisa when it was unveiled – and all terrible art does too.

So, this is a game for Rick and Morty fans is the message here.

The Rick and Morty Megaways slot game comes from Blueprint, a big, well-trusted online slots developer who have made a speciality of tie-in games and who have a good reputation for coming up with innovative features too. The branded Megaways feature from this game is licensed out to a bunch of other developers because players love it so much.

Rick and Morty are delivered here in the signature style that you would expect: it looks like the TV show, and it features Pickle Rick!

What more could you ask for?

Well, we’ll see if Rick and Morty deliver enough to get you to brave their sarcasm and play their game.

What game provider developed the Rick and Morty Megaways slot?

Rick and Morty Megaways slot was developed by Blueprint Gaming.

When was the Rick and Morty Megaways slot released?

Rick and Morty Megaways is a relatively new release by Blueprint Gaming that premiered in online casinos in February 2020.

What is the Rick and Morty Megaways RTP?

Rick and Morty Megaways slot comes with a decent return rate of 96.55%.

Rick and Morty Megaways comes with 6 reels 2 to 7 symbols high. It has the standard Megaways structure with up to 117,649 ways to win featuring cascading reels where winning symbols explode and new ones fill in empty positions.

This slot comes with a TV show theme. Rick and Morty Megaways is based on the cartoon show of the same name. If you watched the series, all the symbols, details, and features will make sense to you as all are related to the show and certain details from it. We can surely say that the Blueprint team is a fan of the show.

Yes, Rick and Morty Megaways slot can be played across all devices including smartphones.

What is the Rick and Morty Megaways variance?

As this is a Megaways slot, it is only natural that it has high variance. Rick and Morty Megaways come with big winning potential and it will take patience to catch the big wins.

Rick and Morty Megaways slot comes with 4 Free Spins rounds and Mystery Symbols in the base and one of the Bonus rounds. Mainly, when you get 3 bonus icons on the reels, you get to choose between the four rounds. Each comes with 12 free spins and different in-game features while the fourth is the Mystery round that can award any of the three bonuses with potentially more free spins.

No, Rick and Morty Megaways slot doesn’t feature any jackpots.

Is there anything else that I should know about the Rick and Morty Megaways slot?

If you play at the highest stake you can win up to £250,000 per spin! Rick and Morty Megaways slot also features the Bonus Buy option (option to purchase the Bonus round) but it is not available in the UK due to the UKGC regulations.

If you like slot machines based on popular TV shows, then you can also try Peaky Blinders slot by Pragmatic Play, Narcos by NetEnt, or maybe South Park slot by NetEnt.

Blueprint – The Developer of Rick and Morty Megaways Slot

Blueprint is a big, UK developer that is now part of the gigantic Gauselmann Group of companies.

You will see their games everywhere, both online and offline because their now-parent company has a long history in cabinet games, and you might see an online video slot favourite of yours popping up next time you pop into a service station or elsewhere.

Megaways is the big news from Blueprint at the moment. It’s a technical feature that delivers many more ways to win than the usual pay lines in a slot game. This doesn’t alter the number of prizes that players take in total, but it does change the gaming experience and it does so in a way that players obviously love, because they’ve made Megaways games big hits, and the system is licensed across the industry.

The current big hits from Blueprint are: Sausage Party (a meat-themed game!), Fishin Frenzy Megaways, Diamond Mine Megaways, this title, and Deal or No Deal Megaways.

The company also likes to produce tie-ins with films and TV series, so to add to this title and Deal or No Deal you’ll find titles linked to The Goonies, ted, and Top Cat.

You can trust Blueprint to deliver a fair, legal, and licensed game.

The Facts and Figures about Rick and Morty Megaways Slot

Megaways games always come in big numbers. The number here is typical: 117,649 ways to win! That doesn’t, of course, mean that you’ll be hitting wins every spin. The theoretical return to player, for example – a measure of how much a game is expected to pay back to players over its lifetime if players behave in an idealised, expected way – remains at 96.55%, which is generous by current standards.

This game is played on a non-standard set of reels, with six reels and seven rows. This is also typical of Megaways games.

Load up this game, which was released in February 2020, on any device that supports JavaScript or HTML5. 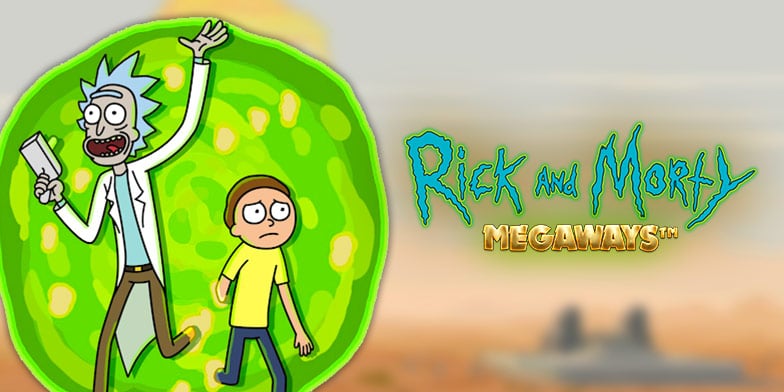 So there are a lot of a-typical features in this game, but the controls will hold no fears for traditional slots players.

They’re in the classic modern style and as minimal as possible, with a floating green spin button to the right of the screen, with its auto spin feature underneath.

The information and menu buttons are above the spin, and you can buy features via a button the right of the screen.

Game information is relayed along the bottom of the screen.

Let’s get into that pay table.

It opens with card suits: they pay from 1 to 1.5 times stake for sets of six.

The green rock pays up to double stake for a full house.

The shards pay up to 2.5-times stake for a full house.

The Morty portrait pays 5-times stake for a set of six.

A set of bonus symbols act as specials or trigger bonus games.

Megaways comes with a built-in bonus in its cascading wins feature. Every time there’s a win, the symbols that made it up are taken out and new ones drop in, continuing until there are no more wins.

The mystery symbol is Blueprint’s version of a wild, and it cycles through the symbols before coming to a rest on one that may complete wins.

This round opens with a choice of:

Vindicator Spins – prize symbols appear on the reels, with the player collecting the total of the numbers they feature at the end of the round.

Mystery Spins – risk it on a lucky wheel spin that can grant up to 50 free spins and a mixture of the extra features. One for the gamblers.

You can retrigger the free spins round, which is also available for sale in the base game.

If you love Rick and Morty you’re going to want to spin this game. It takes the feel of the hit animated series and successfully turns it into an entertaining slot, which isn’t so easily done.

The Rick and Morty Megaways slot game itself is great, but it’s not hugely original. If you’ve played Blueprint games you’ll know a lot of these features. That’s no big deal if you love them already, of course, be our guests and dig in, but if you want more novelty in your game then it might not hit with you.

The high volatility is a strange mix with such low top stakes, and the 50,000-times stake potential win is capped at £250,000 a spin, and that’s nothing to most players. What do we mean!? And that’s a huge top prize that just adds to the attractions of this clever slot.