The Jackpot King system is the centrepiece attraction of the Star Spinner slot game from Blueprint Gaming. That’s a randomly activated multiplier that promises really big wins as part of a progressive jackpot network. Playing on a five by three grid, you can also enjoy transforming symbols, stacked wilds, and respins. Most sites offer the progressive jackpot but take a check of the terms and conditions at your favourite online casino to determine if that’s the case where you play.

Blueprint Gaming’s main base is in the UK, in Newark in Nottinghamshire, but they’re part of the German group, Gauselmann. They’re a design studio and they produce not just online games but also machines that are used in bricks-and-mortar gambling businesses in their home country, in Germany, and in Italy.

They often produce games in partnership with other companies, their games are often big name – they’ve just announced a version of Deal or No Deal as a slot – and they are designed to work across tablets, mobile and desktop machines. 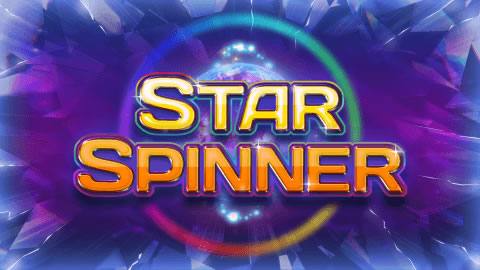 Do you like classic games? There seems to be a real market for something with a touch of the past about it at the moment. Star Spinner slot fits into this segment.

It plays beautifully and has very modern controls and screen set-up, with minimalist text boxes and massive floating play buttons, but open your ears to the retro synth-pop of the soundtrack and you’ll hear the picture. The game is a classic fruit machine of the sort that introduced many an older slots player to the hobby in pubs with sticky carpets back in the day.

Old-fashioned is a virtue to many players and anyone expecting the one-dimensional play that was the norm back in the day will be pleasantly surprised with a game that has plenty of extras and could offer fantastic value for players of all abilities.

Blueprint Gaming is no slouch, and you’re guaranteed good, smooth gameplay and a really good experience every time you load up one of their games. There’s no reason why Star Spinner slot machine couldn’t be a big hit for the company, especially as it works so well on mobile screens, which is where the majority of players are tapping their start buttons these days.

So we’ve covered the grid, which is a classic five-by-three, but how do the rest of Star Spinner’s figures add up?

Please check the particular set-up of the game at the casino where you are playing the game, as it can be possible for games to work slightly differently at different sites.

Star Spinner slot machine has 10 pay lines. Betting is usually set by casinos, we’ve seen the machine running with 20p to £500, but also 40p to £400, the jackpot is 1,000x stake (base-game win maximum is10,000 coins depending on the betting set up) – plus, don’t forget that there’s a progressive jackpot on this game. The theoretical return to player is 96.47% and the variance should probably be rated as medium.

A simple design is backed up with slightly less simple gameplay with Star Spinner. There are bonus games, and very special extras too – including planets that transform into new symbols (a wild variant I suppose), expanding wilds with a Respin, and the progressive game as part of the Jackpot King network.

They may be retro in choice, but the symbols on Star Spinner look great. In fact, the whole game looks really modern despite its nostalgic set-up. The reels float in the centre of the screen with no backdrop to speak of and with a floating spin button and a pair of bet arrows as the only controls. Information is contained in a thin strip across the bottom.

The symbols are cherries, lemons, melons, bars, bells, bars, double-bars, sevens, and diamonds. The mystery symbol is a glowing globe that swaps out for a random symbol and activates the Star Spinner bonus round.

The music here is so good, I’d genuinely listen to it in its own right!

The Star Spinner is the standout bonus. The mystery symbol turns into another symbol but also triggers a respin with a whole reel turned wild. The feature only triggers when you see the glowing globe on reel 2, 3, or 4, but you can retrigger up to three times, which will give you a treble of wild reels to play with and the chance for some big wins.

Blueprint Gaming has a great reputation for their mobile offering, and you can play this game as a mobile slot on all popular operating systems. The floating buttons to the left and right of the reels and the big, easy to read reels are straight out of the mobile-first design book and you should have no problems enjoying this game on smaller screens.

Simply click or tap the green spin button to play. That’s to the right of the reels, underneath it is a smaller Autospin button which you can set for up to 100 spins with sophisticated options on when to quit. You set your bet with up and down arrows at the right. Your balance and bet size and the amount of any wins show up in a simple black strip across the bottom of the screen.

All extra features (sound, paytable, help) are accessed via the triple lines of a modern “menu” button in the bottom right of the screen. The only issue you might have is if you’re a new player who doesn’t recognise all these symbols, but a few seconds should see you becoming an expert in the game.

We think you’ll love playing the Star Spinner. Simple design needn’t be low quality and a game like this really illustrates that point – it’s not sophisticated in some ways, but the delivery is always slick.

Features are fairly streamlined too, but they are entertaining and well designed.

It’s a good value RTP slot game with a potentially enormous jackpot and players would be well advised to check it out at their favourite casino now.

#2. When was the Star Spinner slot released?

RTP stands for the amount that the game will return to the player in the long run and Star Spinner slot’s RTP stands at 96.47%.

Star Spinner slot has a classic reel structure and it features 5 reels, 3 rows, and 10 pay lines. The wins are formed by at least three matching symbols on an active pay line.

Star Spinner has a theme of space and classic slot style. It resembles Starburst slot in both looks and features.

Star Spinner can be played across all devices including all kinds of smartphones such as Androids or iPhones.

#7. What is the Star Spinner variance?

This is a medium variance slot machine with frequent smaller wins.

Star Spinner slot doesn’t feature Free Spins Bonus round. Instead, it comes with the Star Spinner as the only feature in the game. You can trigger it whenever a Star Wild symbol lands on the reels 2, 3, or 4. This wild symbol will then expand to cover the entire reel just like in the Starburst slot by NetEnt.

Star Spinner slot is a part of the Jackpot King network so you can have a shot at the life-changing progressive jackpot while spinning the reels of this slot. You need 5 Jackpot King symbols on the reels to trigger the jackpot wheel.

#11. Is there anything else that I should know about the Star Spinner slot?

With the top-paying diamond symbol and wild reels, you can have a chance to win the top prize of x1,000 the total stake.

If you like Star Spinner slot machine, you can also try the Starburst slot by Net Entertainment. These two are very similar except the fact that Starburst doesn’t come with a progressive jackpot.