What sort of patriots are these then?

Oh, American ones! That means war then.

Yep! It’s a Revolutionary War/ American War of Independence themed slot from Blueprint. How this goes down in the UK we’ll have to see, as the red coats here are very much the bad guys!

Fighting for freedom, and the opportunity to elect Donald Trump 240 years later, are the blue coats of the American Revolution.

Blueprint are a reliable developer whose games are deservedly popular. They tend to have higher volatility and are also usually extremely heavy on extra features. Here the main bonuses are Expanding Wilds and Burning Reels, with a free spins round that starts with 15 free spins rather than the usual 10.

That’s a piece of generosity then, and though the RTP is slightly lower than the usual there is a very generous top prize of 10,000-times stake, and because you can bet quite a lot on this game that could be a very big win.

This game looks and sounds amazing, but should you sign up to change your country forever?

Let’s check it out.

What game provider is behind Revolution Patriots Fortune slot?

This is a Blueprint game. Blueprint are the 4th biggest and most visible supplier on the UK slots market according to the auditing site that we trust. They’re a new offshoot of a company with a long history, the Gauselmann Group, who started out in Germany, putting cabinet games into bars. These days Blueprint do a lot of the digital work for Gauselmann, and they’ve got some big hits, many using the Megaways engine from Big Time Gaming, including Fishin’ Frenzy Megaways, Wish Upon a Jackpot Megaways, and Diamond Mine Megaways.

What is the Revolution Patriots Fortune RTP?

The RTP of Revolution Patriots Fortune is 95.4%. That’s a tiny bit below the industry average. I wouldn’t worry too much about that though. The theoretical return to player is a long-term measure and can only serve as a very broad guide to players. Almost all games have very similar figures these days.

How many reels and pay lines does Revolution Patriots Fortune have?

This game plays out on a standard reel set of 3 rows on 5 reels. That gives you 15 symbols on which to score, and you can score on 10 pay lines.

What theme is used in Revolution Patriots Fortune slot?

This game is themed on the American Revolutionary War, military history, adventure, the USA, and war. The graphics are historical and realistic.

Can I play Revolution Patriots Fortune on mobile?

Yes, you can play this game on any mobile, desktop or tablet on any device that supports JavaScript and HTML5.

What is the Revolution Patriots Fortune variance?

This is a medium to high variance (or volatility) game. The higher the volatility, the larger the prizes are likely to be and the less likely they to hit. This is not a very granular measure and should be treated with relative caution as a predictor.

You can start your betting at 0.1 coins, and bet as high as 100 coins. Please check all the coin values and financial limits on the machine you’re using, but this should be 10p to £100.

Does Revolution Patriots Fortune have free spins and bonus rounds?

Yes, there is a free spins round. The Burning Reels hits during free spins, delivering respins.

Is there anything else I should know about Revolution Patriots Fortune slot? 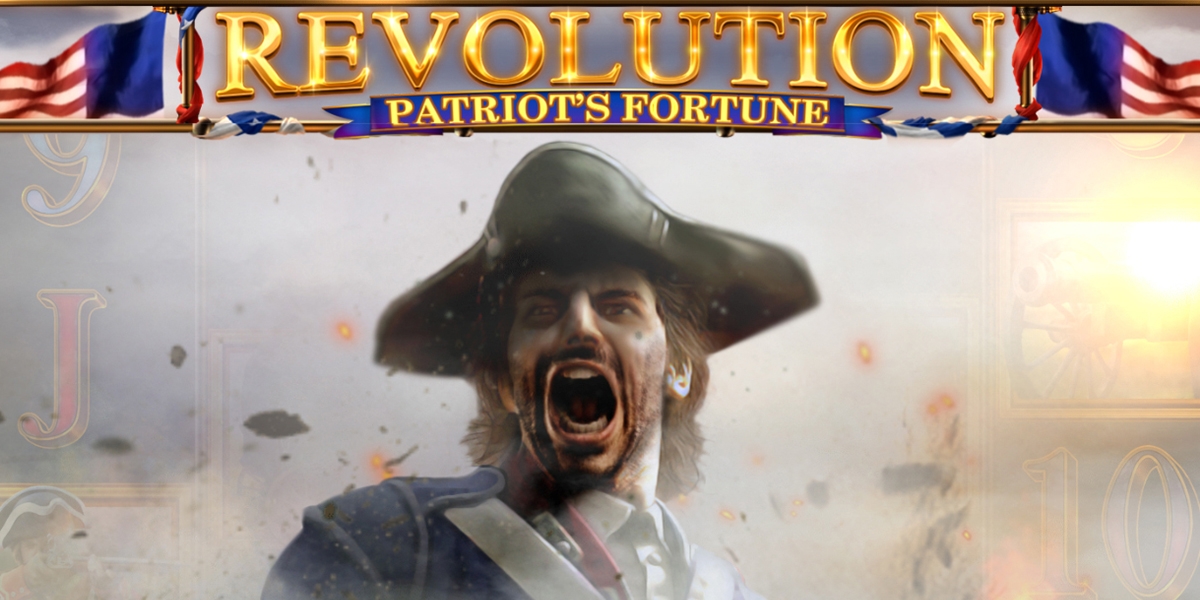 This game is super easy to play. Just hit the green spin button that floats to the right of the reels to play. Underneath that is the autoplay function, which allows you to limit your session by wins or losses. The cash symbol above it opens a separate betting window.

To the left of the reels are the menu options, and a leader board of big wins on the game.

The wild is an officer, who stands in for everything apart from the scatter. The scatter pays 40, 400, and 1,000-times stake.

All wilds expand to reel size and set off the burning reels feature. This destroys the reels to allow a whole new set of reels to fall in, so it’s basically a respin.

There’s a lot to enjoy in Revolution Patriot’s Fortune. Blueprint can be relied on to recruit an army of great features and to set off some big wins with their games.

Revolution does that. The game looks amazing, with the symbols really working well and showing an imaginative take on the theme.

When it comes to features things are a little thinner on the ground than you might expect from a Blueprint game. Really, in the base game, all we have are wilds and scatters.

Yes, the free spins round is great, very likely to be lucrative, generous, and with a fantastic extra feature, but there’s not so much going on before you trigger it, and with relatively high volatility you might be waiting for wins too.

The paytable shows the virtues of higher volatility though, climbing to some big prizes really quickly.

As ever with a Blueprint game, the operation of the software is great, and this game is a pleasure to play.

If you like this them, which is pretty original, then you should really check out this game.