What’s your local Inferno Star? It’s the Sun! Right, though most of us think of it more positively than that title suggests we should!

This is a relatively lightly themed game though, with a Raging Sun symbol thrown into the reels of a really quite classic, retro slot.

The respin round that this symbol helps to trigger are the main bonuses in this game from the massive Play’n GO company.

It was released in 2018, but Inferno Star slot is pretty timeless. The symbols it uses and its aesthetic could be seen on reels from any time in the past few decades.

No doubt these games will always stay in fashion: they generally major on delivering simple but rewarding gameplay, and this game is high variance like many such titles.

There are a couple of things to bear in mind with this game, including an RTP range, so should you stump up the cash to start your journey to the Inferno Star?

What game provider is behind Inferno Star?

This is a game from Play’n GO. With well over 200 games in the UK market, including two in the top 20, it’s no surprise that Play’n GO are rated as third most popular and visible slot provider by the audit site that we use. Their biggest hit is undoubtedly the Rich Wilde and the Book of Dead game, that’s spawned a big series, now including Rich’s daughter Cat. But they cover all styles, including tie-n rock games like their recent Saxon title.

When was Inferno Star slot released?

Inferno Star was released on 25th October 2018, so it’s not a new release by any measure.

What is the Inferno Star RTP?

The theoretical return to player from this slot is in a range up to 94.3%. Play’n GO tends to produce titles with lower RTPs. Ranges allow the sites that host a game to set the RTP for themselves, so check in with the title you’re playing. RTP is a very long term measure, and you shouldn’t base your decisions on it as you may have a very different experience with a game.

How many reels and pay lines does Inferno Star have?

This game is a five-reel and three-row game, the classic set of 15 symbols. It has just five pay lines, which is low.

What theme is used in Inferno Star slot?

This game is themed on: the Sun, classic slots, retro slots, fruit games, and space. The graphics are retro in style.

Can I play Inferno Star on mobile?

What is the Inferno Star variance?

This is a high variance game. Variance – sometimes called volatility – tells you how often you should expect to win (very roughly). A high volatility game will typically pay out higher prizes, but they’ll come less often. There is no agreed industry standard for this measure.

The minimum bet is a very low 0.05 coins, but you can bet as high as 100 coins on this game, which should mean 5p to £100 on UK sites, though check all the financial levels on the site you’re using.

Does Inferno Star have free spins and bonus rounds?

Is there anything else I should know about Inferno Star slot?

There is a two-level gamble feature on this game that allows you to double-or-quit wins with a red/black choice or quadruple them with a four-way suit match. 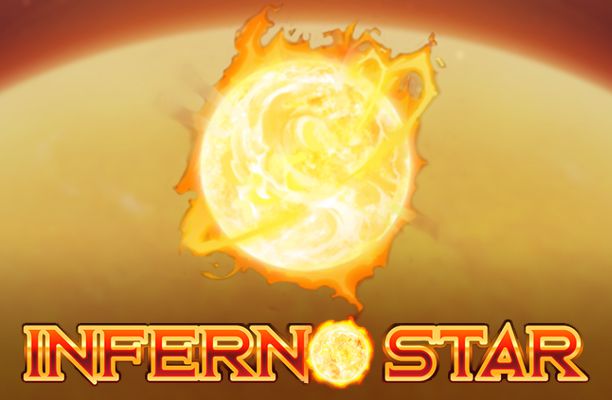 That means an information button at the bottom left of the screen, followed by, a Balance window. In the centre is the betting scale, which is replaced by the gamble/collect choice if you hit a win. Then there is a bet size window, followed by the spin button and an auto spin control. Auto spin allows you to stop the sequence after a set number of spins, after a certain size win, after any win, after a feature trigger, or on wins or losses over a certain amount.

Raging suns trigger the respins when they land in the central reel. Suns are held in place while the reels respin, new spins that land turn into the scatter symbol. The feature ends when there are no more suns.

There’s not a great deal to say about this game. It is relatively simple in a lot of ways, and perhaps the best way to judge whether it’s for you is to try it out.

As usual with Play’n GO, the graphics, sound, animation, and operation can’t be faulted. It looks beautiful.

But Play’n GO usually means lower RTPs. So bear that in mind. And the high variance that might mean you have to wait for a win.

As to bonuses, there’s little to record: scatters trigger a re-spin, there is no free spins round, which will be a deal-breaker for some players. The gamble feature is something we always like to see as it adds a level of interest to the game, but essentially this is a single-shot game.

Good looking and potentially rewarding, this game will probably go very well with mobile players, who will appreciate its retro look and feel.