Adventuring across the oceans is always a good theme for a slot. Pirates, with their apparent fixation on hidden treasures and x-marks-the-spot quests, are a great favourite of the slots industry.

This time we join a man who “discovered” the “New World” and in so doing unleashed a centuries-long genocide, started the transatlantic slave trade and was so extreme in his views that even the people of his time (the end of the 15th century) thought he was disgusting!

There you go though.

Here, he exists in his fictional/heroic form – the guy who gets put on stamps and statues – and it’s hardly the place of the slots industry to tackle historical misinformation that is society-wide.

The game he features in here is genuinely interesting and good. Play’n GO aren’t one of the world’s biggest slot providers, and you can always guarantee at least a good (and legal and legitimate) game experience from them.

This Sails of God slot game goes well beyond that with some really great extras, including a 5,000-times stake top prize, free spins, wilds, and some excellent value stats, including a starting wager of 1p. It’s delivered on a standard 5 by 3 grid, but one that’s beautifully designed and illustrated.

Should you sail away on this voyage of discovery?

What game provider is behind Sails of Gold slot?

Play’n GO made this game. They are one of the biggest companies in the world and have more than 200 slots on the UK market. You’re bound to know at least a few of their titles. The Rich Wilde series, including the blockbuster hit, Book of Dead, is a mainstay in UK slots sites, and Fire Joker is another title that’s part of a successful series. Like so many great slots developers, Play’n GO are Swedish, and they have the awards to show they know what they’re doing as well as a great rep and big hits.

When was Sails of Gold slot released?

This game is a relative veteran, dating back to 21st April 2016. It hasn’t dated though.

What is the Sails of Gold RTP?

The RTP on this game is 94.23%. That’s low in the current market, where most games offer an RTP of around 96%, but not especially so. This is quite typical of Play n GO games and it doesn’t seem to dent their popularity. Perhaps players are all too well aware of what a broad, long-term measure this is – you certainly shouldn’t expect your own gaming session to reflect these figures exactly.

How many reels and pay lines does Sails of Gold have?

This game plays on a standard set up of 5 reels and 3 rows. The 15 symbols that this puts in play are crossed by 10 pay lines.

What theme is used in Sails of Gold slot?

The themes of this game are: history, exploration, the Renaissance, Christopher Columbus, and exploration. The graphics are realistic.

Can I play Sails of Gold on mobile?

Yes, you can play this game on any device that supports JavaScript and HTML5.

What is the Sails of Gold variance?

The variance of this game is low. This is unusual – by definition, most games are “medium” and “high” variance games are more common than low. Low variation games should pay out smaller prizes but should pay out more often. This is a long term measure like RTP, but unlike RTP there is no industry or regulated standard and it is self-applied by developers.

Does Sails of Gold slot have free spins and bonus rounds?

Yes, there is a free spins round. Golden ships acting as wilds appear on the reels for free spins.

Is there anything else I should know about Sails of Gold slot?

It has a risk/gamble feature on all wins. 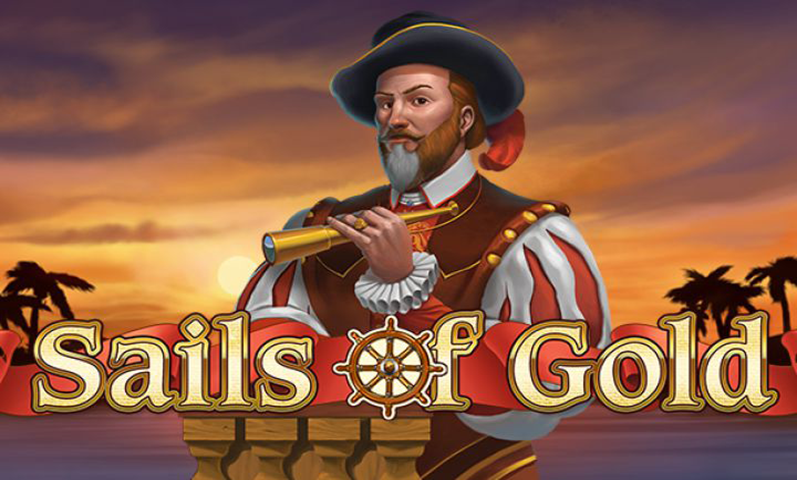 Golden Sails has a standard Play’n GO control panel, with plus and minus selectors allowing you to select the number of coins and the pay lines in play as well as the coin size. Hit the max bet button to risk as much as you can.

The autoplay function has lots of good features that help promote safe play, including a single win-size stop, a balance-increase stop, a loss stop, a Feature stop, and a win stop.

Ships are a scatter and three of them trigger 10 free spins. In the free spins round, you get golden ship wilds on the reels, which can also retrigger free spins.

Historical truths aside this is a great game. It’s jam-packed full of features and low volatility games are consistently underrated in our view – you can’t beat the sound of regular wins in our view.

As usual Play’n GO deliver of sound effects, music, and graphics to deliver a game that takes its theme seriously and makes a beautiful presentation from it.

The gameplay is great, and you’ll want to trigger free spins to really see some big wins. Any game that can pay 5,000-times stake can lay claim to a big-prize crown too, so there are lots of reasons to go exploring on these galleons.